They say that the more colorful your plate is, the healthier it is. Excepting skittles and M&Ms (as my clever J.D. husband never fails to remind me) I have found this to be very consistent.

Here are some of my favorite green staples that I always have in my fridge: 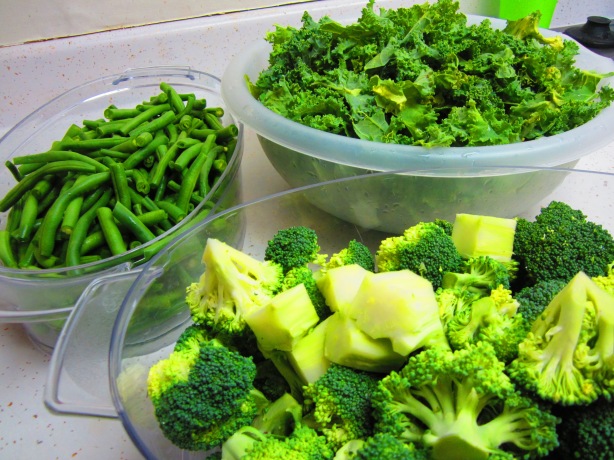 I usually steam the broccoli and green beans in my electric steamer that my dad so eloquently depicted for you all.

In addition to maintaining a hefty supply of raw kale for my salads, I love to bake kale chips. They taste kind of like potato chips, and would probably be a great way to introduce this health-packed vegetable to children.

I encourage everyone to eat more GREEN FOODS.

While a microwave oven can heat up foods quite fast, it does so at a cost. The food heats up unevenly and sometimes dries up or even explodes. I usually have to cover my food with a plastic dome or a paper towel to shield the microwave from exploding beans or other foods. Sometimes my microwave looks like a battlefield by the time I finish preparing my meal. And when I eat the food, it is often dry in places, almost crunchy, and barely warm in other places. This is particularly true when I try to heat up beans or rice.

With my steamer, however, I have noticed that my foods heat up evenly and retain their moisture. This is especially helpful when preparing beans, rice, or the more delicate asparagus, green beans, or broccoli. Additionally, I don’t have to worry about burning my foods in the steamer; it just does not happen, although I guess I could over steam something, but even that has not happened yet for me. Sometimes when I am busy, I just set the steamer for an overkill 20 minutes and let it go until I can come back. If I make it back before the 20 minutes is completed, great. If not, still great. The electric steamer has a “keep warm” mode that kicks in after the cooking time has finished. It keeps the foods warm by periodically releasing a puff of steam onto the food to keep it nice and hot but not overdone.

I was initially afraid to steam multiple courses simultaneously with the same steam. I thought that the steam would mix flavors, but they don’t seem to do that, at least not that I have noticed. I have seen posts on the internet stating likewise with their steaming.

I must admit that a steamer would not be my choice if I were trying to brown some meat, cook some bacon, or otherwise caramelize my food. For that task, a microwave would not fare that well either (though I have cooked bacon in the microwave.) I would use a pan on the stove for that and then reheat the leftover food with the steamer. But with my current vegan lifestyle, I only rarely need to caramelize my food. I say rarely, as opposed to never, because recently I made an amazing pot of vegan chili in which I caramelized my onions and peppers slightly prior to combining them with the tomatoes, beans and spices. I will have to share my recipe for that on another post.  🙂